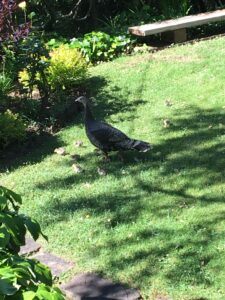 This event actually happened and the best part is that it took place on Mother’s Day. It is eye opening to see how many parallels can be drawn between life in the animal kingdom and humans. I’ll give you a hint….the Turkey Mama is a Warrior Mom too!

In our neighborhood in Marin County, in the San Francisco Bay Area, we have tons of wild life: coyotes, skunks, foxes, raccoons, deer, peacocks and recently, wild turkeys. They are big birds and hearing them make their “gobble, gobble” sounds in person, can be surprising as well as entertaining.

Our garden is filled with many blooming flowers and newly leafing trees, mainly due to our over the top rainfall this Spring. Our yard and neighborhood at large, has become a newly popular pit stop for a number of wild turkeys. I’ve witnessed them flying over head from the roof across the street to our gravel parking area. I have seen them walking up and down the nearby driveways and hear them often, especially in the early morning. It’s been really fun seeing them hanging around!
​
Below is a photo of one turkey visitor on Easter Sunday. The brown colored, plainish looking turkeys are the females. On a couple of occasions I’ve seen a pair of male and female turkeys together, but not on this day. 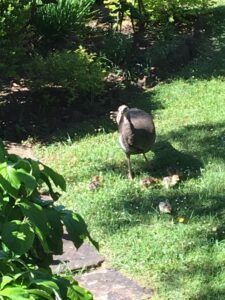 Fast forward a couple of weeks and one day my partner was inspecting the fence along the property line. She almost stepped right on a turkey hiding in the deep ivy. The turkey did not want to be disturbed and made a hissing sound at her. It obviously did not want to be bothered, but why was it there? Just days before a coyote had sauntered through our backyard, in the bright daylight, and perhaps the turkey had been injured by the coyote and was just laying there trying not to move. Another thought was that the turkey was nesting.

After a quick Google search, we learned that turkeys can lay one egg per day, until she has about ten to twelve eggs, with a twenty-eight day incubation period. Then ALL the eggs hatch at the same time. The timing for this event is usually at the end of May into the first week of June. The turkey was probably sitting on her eggs, hiding in an out of the way spot, patiently waiting for them to hatch. We did not know for sure, until the next day.

As I was walking through the dining room after breakfast, I glanced through the large window, at the lower lawn area. I looked out to an unexpected and incredible scene. There was the Turkey Mama and what seemed like a ton of baby turkey chicks.  They were all making baby chick sounds and scurrying on the lawn looking for tiny insects. The Turkey Mama was grooming herself by rubbing her back on the lawn. It was quite a sight! She made a big dirt spot by rubbing out of a section of the lawn.
​
I yelled to everyone in the house to come see what was happening. We had family visiting that weekend and everyone starting taking lots of photos, as we discovered this heart warming scene. Our Jack Russell Terrier shared our excitement, barking wildly, mainly because we could not let her outside to disturb the turkey family. 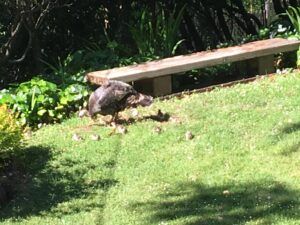 After counting and re-counting, we determined that there were thirteen little babies. This mama had her hands full. Yet, in the middle of the chaos, she found time to keep an eye on each one of them. They were scurrying all over the place, some venturing out a bit further than the rest. Others stayed right by her side. She was patient and kind. And they were as cute as could be!

In a blink of an eye, danger arose for the little chicks called “poults”. A blue jay and then a squawking crow came swooping down towards them. The Turkey Mama made an aggressive move toward the predators and the attacking birds flew away for the moment. The chicks laid as low as they could, hiding in the blades of grass to keep safe, popping up when the coast was deemed clear by Turkey Mama. Then she opened her wings and gathered the whole group under her body, which is called brooding. The attacking birds flew by again and again trying to snatch one of babies, and she became the turkey version of a Warrior Mom. No one was going to hurt her offspring! She protected them and then moved the whole group into a safer location away from the crow and blue jay.

The tense moments lasted for about forty-five minutes. When it became safe again, she brought them out to explore other parts of the yard. The chicks watched and learned from the experienced Turkey Mama. She will be the center of their universe for about four to six months. The poults are unable to fly for four weeks and then will roost in trees at night. They cruised all over the yard and it was easy to see who was in charge.

At the end of the day, they returned close to the original nesting spot, but moved on within about 24 hours to a new location. I am sad to say that some of the original thirteen did not survive, but she did her best to ward off the sometimes cruel world. I watched her show her young poults how to do things for themselves. Her job was to teach them, not do it for them. She was also there to protect and defend them. She kept them moving and showed them the way. All of these takeaways were helpful reminders of our “true” jobs as parents. Hopefully we can let our kids “fly” on their own when it is time.

I do not know where they are now, perhaps we will see them walking down the street or hear them gobbling in the next mating season. My guess is that for now Turkey Mama is showing her young everything they will need to know to survive. It was an awesome Mother’s Day. And oh, we also received a FaceTime call from our son in Utah. We told him about the Turkey Mama and her poults and sent him a photo in a text. I think he thought it was cool, too!

Full of gratitude, I am…