This past month has been a very exciting time for my 17 1/2 year old son! He has started a new program in a new area of Utah. This program is what is known as a “Step Down” program in the treatment world. It is a small co-ed, boarding prep school with only 37 total students and a place of many possibilities towards a bright future! Much of what he learned at his Residential Treatment Center (RTC) will be put to the test quite quickly! It will be a perfect place to practice!

We left the Ranch last week on a Thursday and drove down to Southern Utah with a car full of clothing, boots, binders and memories! The exact day and time of the departure was kept under wraps by the staff, as close to the last minute as possible, so the students keep participating and working on their issues. In my son’s case, he had a vague idea of when he would be leaving, but not the exact day and time. We challenged him to continue to put in the work, in what would be his final weeks of his almost 17 month stay. He was ready and we were ready! He had learned all that they could offer and succeeded in many aspects during his time there.

One of the biggest achievements was that he finished Geometry, and took his final test (a re-test) and passed with 100% on his next to last day! Days earlier he had only scored a 47% on that same exam. In fact he passed three tests during his last week, which helped quite a bit. He had been ready to give up and accept a half credit for the course just weeks prior. But we as parents and his therapist pushed him into getting the studying done! We told him that if he completed Geometry, he would never have to take that class again, ever! Geometry was not his favorite subject (and who can blame him for thinking that!) but he did get the job done and WOW you could see his pride and excitement when he told us all about it on his final day at the RTC. My son also shared he that decided to skip his team’s basketball game (his did have a sore wrist, but still getting off campus was always a treat) and so he hit the books in order to finish this daunting math class! It was one of the first times that he directly saw the pay-off for actually doing the difficult work! It was a huge accomplishment!

Another big moment for the kids leaving The Ranch is coming up with a “brand” and having it burned into the wall at the entry of the Administration Building and another on a take-away plaque to keep. There are so many unique symbols from every boy who had left prior to my son. It is considered a very special ritual and as we were landing at the Salt Lake City Airport, his therapist texted pictures to us. We would miss that moment in person, but would be able to participate in the “Goodbye Group” with his fellow students, many staff members and mentors. 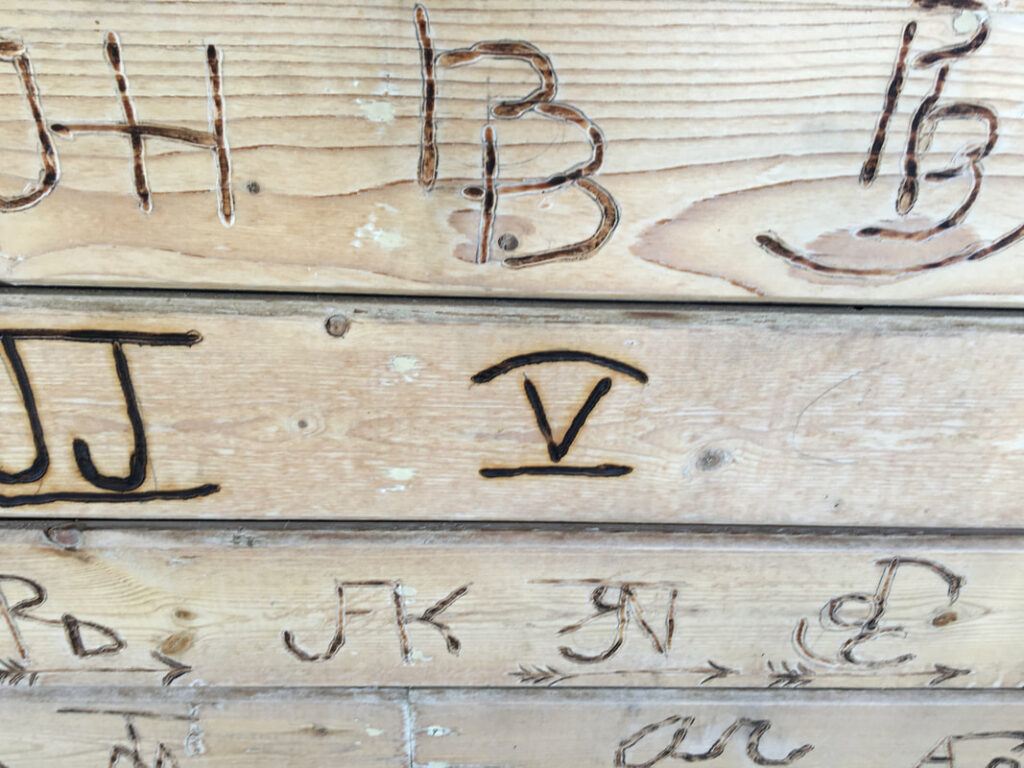 As we entered the Bunkhouse, where my son had lived since the very end of September 2017, he warmly greeted us with the biggest smile imaginable! He remembered that is was my birthday and even told me, “Happy Birthday”! Those words were the best gift I could receive! I was very moved! As we were getting ready to begin the Goodbye Group, the boys in the bunkhouse all started singing “Happy Birthday” in unison. That really floored me! Even with prompting from the staff, they were able to show their sweet sides to another parent in their group! That put a big smile on my face!

There is a designated couch at one end of the main room where my son and the two of us sat. He spoke into a small hand held recording device and announced that it was his Goodbye Group, the date and then paused it, as he passed it to the first boy sitting to his right. They each turned on the recorder, introduced themselves and offered words of wisdom, encouragement or memories of my son and their joint time at The Ranch. Some spoke a short time, some a little longer, but all the messages were heartfelt and very thoughtful. The staff members all participated and added their advice and remarks to and about my son. Our son’s therapist had a couple of quotes that rang true as perfect advice for his future. One was from Mohammed Ali, though I can not recall what the quote was at present. My son will get a copy of all these special sentiments and will be able to listen to them later.

As the recorder was handed to me, I was overcome with emotions. I was going to miss this place, even though it was  difficult having my son so far away from home. This place, that was a safe haven for my son. A place that gave him confidence in himself, where he took care of newborn calves, where he rode horses each week, where he did his own laundry, performed in the Parent Day’s Variety shows and succeeded in school! There were so many thoughts and memories swirling in my head, I had to focus on what I was going to say to him as my parting words from the RTC that was his home and school for over a year!

I turned the recorder on, and couldn’t speak. His therapist was quick to retrieve a box of Kleenex as I gathered myself. It was very silent and then tears began running down my cheeks. My first words were, “WAY TO GO!” You did it. It may have been longer than we all thought it would be, but YOU DID IT! I am proud of you. You stuck with the challenges, leveling up and then even leveling down. Participating in all sorts of therapy, more than anyone can even imagine! But what stood out to me was that your effort was there, even when it didn’t look like if from the outside! You wrote us weekly letters, even if they were mandatory assignments. I am so lucky to have a large stack of them. Yes, they were short and somewhat repetitive but they mattered! I looked so forward to receiving the scan of a new letter every Monday! If for some reason it came on a Tuesday, I was beside myself with anticipation of getting that letter. I was always happy to know that you were okay and were even having a good time!

I then told the boys in the room that their parents and loved ones really appreciated getting their letters, whether they realized it or not! My words to my son then returned back to a simple, yet important theme. I was proud of him, because he was present. I know that being away from home was not something he would have chosen. I know it was hard for him. But guess what, it was hard for me too, not having him home. And most importantly, his original goal (that he stated to the Admission’s person on his first day) was to repair and improve the communication and relationship with his moms. I believe as he does, that he accomplished that!

“You did it son! Way to go! I love you! I can’t wait to see what’s next for you and your future! I’m really excited for you! It’s now all up to you! And we are here for you and still have your back!”

The mic passed to my partner who said something awesome to him and I know he was listening from watching his facial expressions. The circle was complete. We then all went downstairs into the CafeA and had some delicious birthday cake that my son had made in the school’s kitchen, along with his therapist. There is a tradition (at the Ranch) of getting a cake on your birthday made with your favorite ingredients and that was true for me too: chocolate cake, chocolate icing with Reese’s peanut butter cups and Reese’s pieces all over the top! What a birthday I had! We said our last goodbyes and hit the road down to Southern Utah. The next day was going to be big! Entering the Step Down program where my son knew he needed be, for now.

In the car, we talked about our various memories of the Ranch and gave tribute to all those people who helped us along the way. We are all excited to see what’s next! Our journey continues….. Stay tuned!

I AM ONE FORTUNATE,