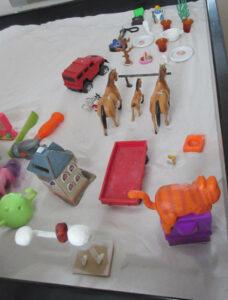 My son’s “Spring Break” was at the traditional time on the calendar, but the length was a shortened version of the typical mainstream school week long break. At his Residential Treatment Center, they give the boys two days off, plus the weekend. We arrived on Thursday afternoon and left very early Monday morning to catch a flight back to the San Francisco Bay Area in California.

We started his “break” by participating in our weekly therapy session and with something called “Sand Therapy”. Who knew it would be so fun? We were lead to one of the main houses, where a group of boys reside, into a back room. We were given the instructions to build a scene in the standing sand box. Along the walls of this room were shelves filled with all sorts of toys figurines and “doll house” types of objects. There were fences and army men, and Smurf  and other well known characters, as well as small houses and plenty of animals. We had five minutes to create a scene of what it was like before our son went away to treatment.

We each got to work, selecting pieces off the shelves to “tell our own version of the story”. Each scene was very different and creative. When we finished, each of us described what our sand scene was all about. We then asked each other questions, which opened up an honest and meaningful discussion about this difficult time in all of our lives.

My son’s “creation” was very symbolic and genuine. He chose a Rubik’s cube to represent himself.  The cube had been turned and pivoted many times, so none of the sides had matching colors, and it was completely mixed up (perfect symbolism of his state of mind and being then). The cube was placed on a mound of sand with plastic horse corral fences positioned around it. Our figurines were sitting way down the path, far away from the Rubik’s cube . He used a gentle Smurf character to represent me, while my partner was a giant insect with a small group of Army men in front of her. Appropriate? Perhaps not, but it told our story of chaos and disagreement.

For my scene, I used traditional doll house furniture which represented his bedroom: closed off from the rest of the house. It had his bed and computer it in and he was turned away. I used little people to show that we were all in different rooms, demonstrating a lack of togetherness or communication. The emotions behind my scene represented feelings of loneliness and isolation. Again another powerful exhibit of what our house felt like to me before our son went to treatment.
My partner had another variation of the same theme:  displaying a sullen and dysfunctional time for our household. There was a row boat, three wooden barriers and a hippopotami with a computer in the center island also showing a tentacle light creature representing our son.  These scenes were an emotional release. It allowed us to talk about our feelings without resentment or blame. The make believe nature of the scenes lightened it up and we enjoyed being creative in our story telling and our follow-up explanations of the symbolism.

The next part of the assignment was to create a NEW scene of how we would all like to see things, when it’s time for our son to come home. (We have no idea when this will be). We put back the original pieces and quickly gathered different symbols for our new scenes.We could see a common thread among them. There was a hope and joy focus on being together in all of our sand scenes. I used three horses next to a tie up post that could tether us jointly, with a cheerleader behind us and lots of new adventures in front of us. My son’s scene had three little plastic people figures under a house. We were all facing each other. A Wonderful idea! And outside of the house was a car heading up a road towards a positive future. My partner had a equally powerful scene filled with super heroes and a common goal of sharing. Again we talked and laughed and shared our feelings and thoughts.

Our sand therapy session provided an alternate way of discussion regarding our past differences and a bit of our  brighter future. It opened a door to sharing our feelings in a non threatening way. It was creative and fun! We all enjoyed our time playing in the sand! I hope we will have an opportunity to do it again! We all recognized how far we had come. We know there is still much more ahead, but we had a great start to our SPRING BREAK visit. More on our many activities in the next blog post. You won’t want to miss it!